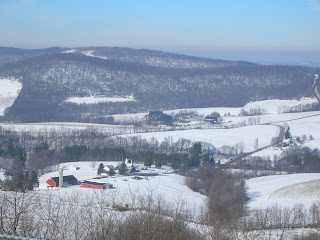 "Peace in the Valley"

This is the place where my father rests. It is in the mountains of Western Maryland. I took this last week before we left. It snowed that weekend. As a matter of fact, the day we left was the nicest day we had. I hadn't seen the blue sky all weekend, or for that matter, since we had left Indiana.

If you look carefully, you'll see a black roofed church. That's the church my father served at for ten years. He is buried in that cemetary. He is buried amongst his congregation. He will be happy there. He is among friends.

Last night I had an opportunity to go to an
IU basketball game in Bloomington. 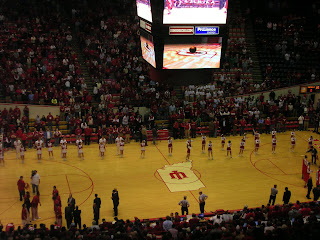 This picture is from part of teh pregame warm up. The cheerleaders are in the midst of some cheer or another. Its always a good time going to Assembly Hall. The game was alright, the Hoosiers seemed a bit flat. It wasn't their best game, though they did win, by three points. 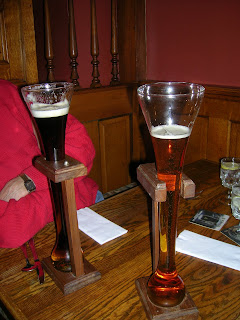 Prior to the game my friend Joe and I went to a restaraunt called The Irish Lion. A wonderful place to eat. I had a bread bowl of a soup called Codel. Yummy. And to wash it down I had a half-yard of beer (hence the long glasses).

I'm slowly coming back to some form of normalcy. I didn't realize how tired and stressed I'd been over the last month. I've needed this down time.
Posted by loofrin at Wednesday, February 27, 2008

Bet it's hard to walk out of the bar with those glasses!