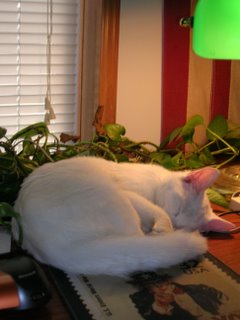 emma asleep. she can do no harm here... i hope. 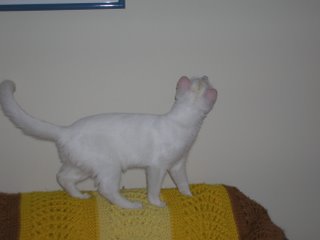 emma comparing her fur color to the wall... cammoflage?
Posted by loofrin at Tuesday, November 28, 2006 No comments:

She's cute. At least I think she's a she. She's all white except for a small light beige coloring on her head. She introduced herself last night through plaintive cries under my window, cliched, I know, but that's how it happened. And this morning she I found her huddled in a corner by the stairs under my bedroom window. After that, all bets were off. She commenced to come onto the porch and climbed the screen door she knocked on the window and demanded entrance.

So let her in. My other cat, Woody, isn't too sure about this whole arrangement, but he seems to like the other cat. There has been little, if any spitting or hissing, some low-level growling, but that's about it.

We have decided to call her Emma. I'll post some pics as soon as she stops running around exploring the house and she'll still long enough for a proper portrait.
Posted by loofrin at Monday, November 27, 2006 1 comment: 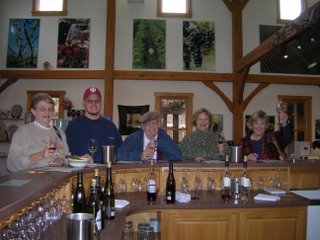 This picture was taken at the
Oliver Winery just outside of Bloomington. I took my parents and my mom's cousins down there for a wine tasting. From left to right: mom, me, dad, ellen, and loise. We were having some wine and enjoying ourselves immensely. Oh, and my mom and I ended up buying 60 bucks worth of wine. Her cousins probably that much, if not more. Oliver Winery makes some good wine.
Posted by loofrin at Tuesday, November 07, 2006 1 comment: 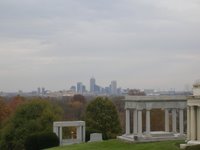 We have had some relatives visiting us this weekend. My mother's cousins (first cousins for her, second for me, once removed, I think is how it goes). Yesterday, I took them around the city. It was a nice day, a bit chilly, perhaps, but nice. The Colts were out of town yesterday, they were set to beat the New Englad Patriots in Foxboro, Mass. So, the streets were pretty much empty and we were able to park easily and roam around a little bit. Indy is a nice city. It really is. Our main objective was the World War I memorial. It is a large, temple-like structure that stands prominently in the skyline. Its pyramided top 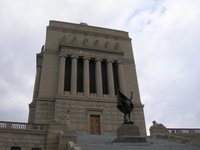 is easily seen from many vantage points in the city. As you walk up the stairs and it gets larger and larger a certain feeling of smallness begins to infiltrate your being. It is just so large and sturdy. You can get some great views of the Indianapolis skyline from the memorial. As you walk inside the feeling of history stopping kind of hits you in the face. The memorial was started in the 1920's, or so, and it has the art-deco feel to it. There is a large theatre inside that is named after Gen. "Black Jack" Pershing, and two smaller theateres in the wings of the monument named after Eisenhower and McArthur. 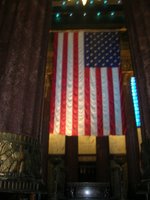 There is a flight of stairs that leads from the lobby up to the second floor. It is worth the trip. That walk, though, is not without some sadness. On either side of the stairs, on the wall, is poster after poster of soldiers killed in one or another. I find myself trying not to look at them, but I can't help it. The fact each name represents one man, or woman, who lost their life for me can get a bit overwhelming, so I do not dwell on it too much, I just trudge up the stairs.

Awe waits for you atop the stairs. The first time I went to the memorial I was struck dumb by what I saw. Talk about a temple. Sadly, the pictures I have of the inside don't come close to capturing it. The room is dark and cavernous. On the walls are six portraits of the generals of the allies, lit by single light bulbs that hang above the portraits. In the center is this huge raised marble square, it comes up to my waist. On the top is beautiful rendition of the Seal of the United States. Standing by the corners of the marble square are four large (and I mean over six feet tall) marble pillars that look like they could be massive torches. One can't help but be silent.

After that we toured the museum that is located there. Very well done.

We went to lunch at Rock Bottom Restaraunt. Nice place, good food, and a good beer.

From there we went to Crown Hill Cemetery so that they could see the skyline of Indianapolis from hill where James Whitcomb Riley is buried (that is the picture at the top of this post). Then we went home.
Posted by loofrin at Monday, November 06, 2006 2 comments: