A non-rant directed towards the Goosesteppers and the Petters

I had this big rant in my head that I was going unleash here in this blog. It was all about the Goosestepping, my-way-or-the-highway "conservative" and the flighty, where-doth-the-wind-me-this-day "liberal" elements of this here LCMS. And how the center-of-the-road, leave-me-alone-and-let-me-worship guy that I am has grown tired of both.

I was going let loose a barrel or two of invective on those who are whining and pouting because their guy, whoever that might of been lost the last election for Synodical President and how much I wish they should shut their collective yaps, put their respective noses back into joint and hope they don't burn them on the ceiling lights and get back to the business of saving souls.

And after I got done with them, I was going to reload and let fly with some rhetorical buckshot on those that have worked dilligently to waterdown, campify, and P.C.-ify the Lutheran liturgy. I was going to be sarcastic in thanking them for that and asking if they might have a some more "I love Jesus" songs that I can sing so that I might do a good job of "petting" Jesus instead of worshipping him.

But, its late, I just got off of work and the frustration I had evaporated as soon as I got out of the car and got to stretch my legs a bit and I got thinking, "you know, why go there; you'll offend both sides and I just don't feel like dealing with either side."

So, I think I'll just put in my game six of the 1986 World Series DvD and watch as Billy Buckner flubs that ground ball. That's more fun any way.
Posted by loofrin at Thursday, June 22, 2006 2 comments:

Music to Rock By

The funny thing about Toccata is that as I listen to it I imagine Bach being very angry when he wrote it. For some reason it comes across as being an angry piece of music, at the very least a very dark piece. I am totally enthralled with it. I've heard it before, but I've never been able to hit repeat again and again. And with my new-car stero system (a Pioneer, six speaker) it goes Boom, or at least Bang.

I'm sure I've gotten some funny looks from folks as they look over at my car and I'm playing air-organ on my steering wheel at a traffic light.

Thethirdworstpoet noted me saying that she prefers Beethoven to Back. I enjoy Beethoven alot, too. The Ninth Symphony is, in my opinion, a God inspired piece. The piece takes me places no other piece of music can. Everytime I listen to it I am uplifted. The Fifth is good, too, isn't that dumb phrase "the Fifth is good, too" (what a rube I am), but it doesn't transport me like the Ninth. The other Beethoven Symphony that gets me is the Pastoral symphony, the Sixth. That one... wow.

Vivaldi's Four Seasons is another piece of music that just grabs ahold and won't let go. I think Winter is my favorite portion of that, its either Winter, or Fall. The whole is amazing, though.

I can't forget the 1812 Overture, either. Nope. That one has a special memory place in my heart. When I was a kid I used to live across the Hudson River from West Point and every summer they had a concert series. Every Labor Day weekend they would have a big 1812 Overture concert that included three or four howitzer batteries firing blanks at the right times... to an nine or ten year old you can't get much better than that.
Posted by loofrin at Wednesday, June 21, 2006 No comments:

The other day after work I bought a two cd set of Bach organ music. The first two tracks are, of course, the requisite Toccata & Fugue in D minor. Even if you don't what it is you've all heard it, at least the opening strains of it: think horror movie, or Munsters. I think they used it often. I have to chuckle over the Toccata, though. Every single disk I looked at that dealt with Bach's organ music had at least some form of it recorded be it parts or the whole thing. The other thing about the whole Toccata thing is that Bach wrote them as a way to "test drive" organs. He put the organs through their paces to see what they could do. That is one reason why they are so dare i say it: "fancy."

What's even funnier is this: as I'm driving down the road, my windows are open and I have Bach going... I've gotten some interesting looks from people beside me at traffic lights.
Posted by loofrin at Monday, June 19, 2006 4 comments: 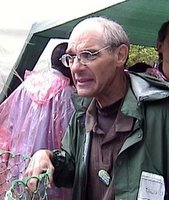 I have decided that this man is a much better Christian than I am. His name is Michael Berg. His son,
Nicholas Berg, was decapitated. This decapitation was filmed by Abu Musab al-Zarqawi a leading figure in the Al Quieda terrorist group.

Zarqawi was killed yesterday by bombs dropped on a safe house. This article on Yahoo talks all about it.

I'm sorry, if someone decapitates my son and tapes it they deserve the wrath of God, or at the very least the wrath of United States military.

This is my 2006 Chevy Cobalt. I bought it on Tuesday. Circumstances with my old car were such that it was time for a new car. Needless to say, I'm still a bit shocked and dismayed that I am now driving a brand new car, it has 166 miles on it. The car, that I call Kyle, came off the lot with 7 miles on it (the irony is that my first car also only had 7 miles on it when I pull IT off the lot).
Posted by loofrin at Thursday, June 08, 2006 2 comments: