I'm not sure I have anything worth writing about, but its been a while since I stopped by and put my poorly written missives on this great thing called the world wide web. I have to wonder if the title is from a song lyric, I don't rightly know; its one of those keyword searches that landed someone here in my little cyber slice of heaven.

I've been doing a lot of reading lately. I think I'm to something like 15 books this year. I've made a list of the books I've read (I'll post it eventually). One of the cool perks I have at work is I can borrow hardcover books. I borrow them, read them, and then return them. It's a great money saver, but it also allows me to become familiar with product. The last book I read was Snuff by Chuck Palahniuk. I'm not a huge Chuck fan. I've read FIght Club a few years back and have listened to another one of his books, a nonfiction that I think was called Stranger than Fiction, but that's is.

It wasn't a bad book, but it didn't exactly set my world on fire. As per usual, and this one reason why I don't generally read Chuck, the book is rather disturbing. It is about a 600 man gangbang. It is written from the viewpoint of Mr. 72, Mr. 137, Mr. 600, and the "talent wrangler." We are, for the most part, kept in the "waiting room," if you will, which is fine, I don't need a, pardon the pun, blow by blow account of what's happening upstairs with the aging pornstar actress. There are some twists and turns in the book and at times, I felt a bit bewildered. The book is short, just over 200 pages, so reading it was being a fast moving train. It was tough to keep up. It kept me off balance a bit, I'm sure that was the intention. Chuck obviously did reasearch, he certainly delved into the "Babylon-esque" world of Hollywood. A dead movie star? We found out he or she died. I guess I'd recommend it, but with reservations. Its not going to help you learn or figure out the bigger things in life, for example Pi. Its not even all that entertaining. Any book that you have to read while looking through spread fingers because your stomach is turning is not a very good "relaxing read." I'd give it a B+, I guess.
Posted by loofrin at Thursday, May 22, 2008 1 comment:

I've decided to do a new series of posts, or at least use a different way of coming up with titles. I won't completely do away with the "In Which Your Faithful Narrator..." series, but I think I'm going to start doing a "here's how you found me" series. What I'm going to do is just use the most interesting ones as titles for posts. That's what this title is, I saw it on my little tracker that I have.

I had to take my cat, the big gray one, to the vet today. Turns out he had a toothache and had to have the offending tooth yanked out of his gob. So, the little guy is hanging out in the vet 'til tomorrow.

On another frustrating note: my dad was a play lover. He loved drama. He had many hardbound play scripts that he had gotten from a club called Fireside Playhouse, or something like that. Well, because we just can't keep everything from his library we have started the long process of sorting through his books. Today, I took five boxes of play scripts to Half Price Books. I know that one doesn't get much when they sell books to Half Price, but more than anything I think its the "I got rid of it and its not cluttering up my life any more" feeling. Guess how much they offered me for five boxes of books well over a hundred plays. Never mind, I'll tell you: four dollars. Not four dollars a box, but four dollars all told. I couldn't in good conscious do it. They sit in my trunk. I'm not sure what I'm going to do with them. I'd like to donate them, I think to a library or something.
Posted by loofrin at Friday, May 16, 2008 No comments: 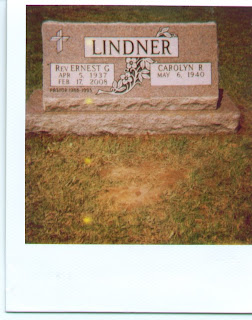 The above picture is a polaroid of my father's headstone. It was placed last week or so. My mom and I haven't been to Accident, MD yet, to actually see the stone, but we will sometime in the near future.

My dad would of like the stone. It fits the cememtary and isn't ostentatious at all. It blends in nicely. The most important part of the whole thing is that he is amongst his congregation. Many of the folks he ministered to when he served St. John's are around him.
Posted by loofrin at Tuesday, May 06, 2008 2 comments:

I don't have much more to say than that. It just kind brightened up my day.
Posted by loofrin at Sunday, May 04, 2008 2 comments: