In Which Your Faithful Narrator Becomes a Lutheran Carnival Barker, aka Luther's Punkin Hat Carnival

Before commencing with
Lutheran Carnival 59 I feel it important to give a shout out to Concordia Wisconsin's football team. Congratulations on the drubbing you gave to Eureka College yesterday on the gridiron... 70-0... I'd've loved to see that game. I certainly hope you treated the defeated to beer and brauts afterwards. Lord knows, they probably could of used the cheering up. But either way here's a Disgruntled World Citizen HAZZAH! in your honor.

Speaking of the Con-Yous, and being a graduate of Con-You Austin (hence forth to be known as Con-You Texas and also being a "Behnken Boy" (I lived in Behnken Hall) I thought it might be fun to highlight 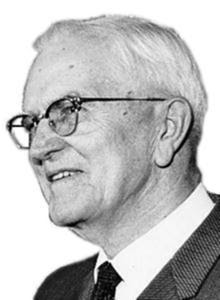 He first served as a missionary-at-large in Houston. Two years later, he accepted a call to Trinity Lutheran Church in Houston.

He was the President of the LCMS when my father was ordained in 1962. And, I lived in the dorm named after him on Concordia Austin's campus. So, I just wanted to give the "Original Behnken Boy" his proper due. (source) 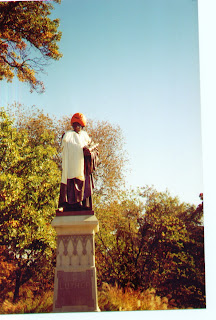 was taken on October 31, 1999 on Concordia St. Louis', aka The Big House, Campus. It seems that some of students from the Catholic school nearby decided to dress up ol Marty Luther. I thought it was a hoot, but when the Dean o' Students, aka Fourth Use of The Law found out, he was none-to-pleased (party pooper). Sorry I wasn't able to get a better picture. I scanned the picture I took. If you want a better look at it, go here.

Its been awhile since I did was a Carnival host. So, I may be a bit rusty, but lets give it a shot and see what happens. Our first submission for your purusal comes from ye olde blog of
House, M.Div (cool title for the blog btw). This entry discusses Lawsuit against God. He, House, has a nice little rebuttal for Mr. Chambers at the end. I've heard of Chambers before; he played an important role in this documentary I saw a few months back. Then there's this submission in which House discusses praying for Muslims during their holy days.

James Wilson, co-author of the House, M.Div blog, sent along two of his posts as well. The first takes on the New York Times book review (which is always fun to do) and the review for the recently published book How to Read the Bible. Mssr. Wilson does a fine job of deconstructing and arguing against the New York Times, HUZZAH! James Wilson's second submission discusses an interesting side note to the debate over illegal aliens, but also puts a little smack down on the role of the church.

From the Rebellious Pastor's Wife sent this post; being a PK, I can relate to it quite well. I think her tagline sums it up nicely: "Some basic, hurtful assumptions that are directed at pastors...how they hurt, and how we really should treat our pastors," if only your parishoners did see how hard you guys worked every week... but that's neither here nor there...

Next we have everyone's favorite cyber anteater, Aardvark. He was kind enough to send along two posts, which, of course taught me something... darnit! The first one discuses Holy Cross Day and the second discusses St. Matthew, but also shows the etymology of the word Gospel. An aside, how does the 'Vark has so much time to devote to blogging? There must be more than one of him, either that, or he is the most caffinated Lutheran ever... anyway, moving on...

Rev. Snyder comes at us with two posts this week. The first could probably dovetail from House M.Div's post regarding Ernie Chambers' suite against God. But Rev. Snyder discusses in detail the ins and outs of Christians and lawsuits, not from a lawyler point of view, but from the position of a faithful Lutheran pastor. Thought provoking as per usual. Then Rev. Snyder hits us with a post based on 1 Thes. 5:16-18 and discusses the "pray without ceasing..." what does that look like? How does it feel? Answers here.

From the Lutheran Library we get this post; in which Noah's Ark is discussed. After reading this review, I may have to give this book a looksee for myself.

Dan the Man from Necessary Roughness sent this post about a television show I've never seen: Survivor and its "token" Christian. It will be interesting to see how well she does on the show.

I add this to the mix: review of the book American Band, a book that I'm pretty excited about right now.

And last but not least: This post from livingsermons, over at wordpress.com: "Chaplain Boarts shares a story about four valiant chaplains in World War II and how their sacrifice is remembered today by young Airmen, Soldiers and Sailors." This one has video to go with it.

Well, I guess that's it. Thanks for stopping by. Peace and blessings to all.

Thanks for hosting the Lutheran Carnival! It looks like a nice assortment of posts, and I look forward to checking them out.

Too bad there's not much oil in Indiana, or I'd buy you a brew and a bratwurst or two. :)

Thanks, DWC. God willing, I'll set the reciprocal link sometime on Monday. Just one small quibble, however: When you click the "first" link for Ask the Pastor, you get sent to the main blog instead of the article on Christians and lawsuits.

Great job DWC! Thank you so much for hosting.

I fixed the first link to Ask the Pastor. Sorry about that.

Thanks a bunch for doing a great job with the Carnival!

Thanks for hosting the Carnival! I always enjoy the leads on good Lutheran blogs.