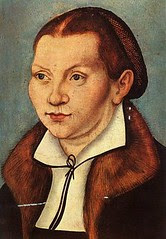 This week's Church Father props go to a Church Mother: Katie Luther. And I'm taking the easy way out. BeStronginGrace, a fantastic Lutheran blog already did the work for me, well her and Google . As I thought about this week's Lutheran Carnival I realized that I needed to find a "church father." The first person that popped into my head was Katie. Hey she had to be as strong willed and pig-headed as her husband. I can't imagine what stresses she had living, caring, and watching out for Martin. I honestly think she is an unsung hero of the Reformation. I mean, come on, her husband was under Papal ban and death sentence... I wonder if she bargained for THAT when she and her fellow nuns spirited themselves out of the convent in fish barrells... so, any way, this week's three cheers go to the Mother of the Lutheranism, Katie Luther.

Rev. Peperkorn, over at Lutheran Logomaniac sent this post to me. It asks the question: what exactly does a pastor do that just isn't "feelin it," that is he needs to filled with the Word. He needs to hear it, not read it, but hear it, he needs to be in the pew to be filled. Rev. Chryst at preachrblog sent this its a story about what happened to him the first time he gave a "sermon." It is funny, sad, and scary all at the same time. And in some fashion its a story we can all relate to; I kind of dovetailed from that with this post.

Vicar Chaz , over at Drowning Myself Wherever I Can (ed note: give this guy a lifejacket we don't need him drownin any time soon) submitted his thoughts on Matthew 9:1-8 and marvels at the power given through the Office of the Keys. Then Chaz hits us with his thoughts on apostolic succession. (ed note: This Scaer the Greater you speak of, I assume this the Seminary prof at Ft. Wayne... he and my father are from the same church in Brooklyn, New York. Rev. Scaer's father was my father's childhood pastor).

Rev. Stiegmeyer who authors Burr in the Burgh, from Pittsburgh, PA (home of Greatest Team of all Time) has some pointers for new bloggers, but I'm sure "old bloggers" (a relative term, I know) can use them, too. Take notes, they'll be a test later.

Ryan who is doing God's work in Thailand sent this post he discusses "the ways in which Evangelicalism is veering more into Buddhist or Muslim territory than Scripture..." this post, in his words is "1 part satire, 3 parts serious Lutheran reflection." Some great food for thought in that one. This brings me to my friend and yours Teresa (aka:BeStronginGrace) up in the great white North tundra of Minni-SOH-tah... her thoughts on Ashley Smith, Rick Warren, the book A Purpose Driven Life and how the media's coverage of "evangelical Christians." The other submission for the week was this one. Talk about hard hitting. I had to read this one a couple times, there's alot there to chew on. Read it. Along those same linesBalaam's Ass asks the the question is Joel Osteena Christian? (ed note: I dunno, but he's a pretty good story teller, sort of).

Big Dan (aka the Big Daddy, aka the Enforcer of the Lutheran Carnival) contemplates Justice and weakness and the difference between "niceness" and stupidity.

Since I'm talking about Dan, I might as well talk about his Grrrlfriend, Elle, the intollerant one. She seems to think that men shouldn't be in charge of merchandizing. (ed note: I'll tell ya Elle, I think I'd like to buy a truck just like that... I'm sold).

My new buddy Preacha-man Dave from Mooreseville writes about missing his baseballbox scores and more importantly his (and my)New York Mets. Next, he tackles the national pastime: Nascar and its liturgical aspects, sort of.

Erica over at Journalistic Jargon has a simple answer to those of us who forget to give our burdens and worries to Jesus and let him worry about them. (ed note: This is easier said than done for me, I needed to read this post. It came at a good time. Thanks Erica!)

Rev. Snyder at xrysosom answers questions about Faith and Holy Ghost and explains the meaning of the parable of the woman who stood up to Jesus and told him that even dogs get crumbs from the master's table (Mark 7:24-30). Interesting insights to both questions here.

The Aardvark uses the New Orleans Disaster as an object lesson about faith and equates it to rebuilding New Orleans on sinking sand. Then we get a History Lesson about one of the greatest female athletes of all time: Mildred Ella "Babe" Didrikson Zaharias (1911 – 1956). interesting stuff, these posts were. (ed note: if the Aadvark ever decides to make t-shirts with the cool aardvark mascot, I'll be first in line to buy one-- *hint*).

Dan writer of Necessary Roughness (I love the graphics, Dan, they crack me up). Sent two submissions. The first he discusses Oregon's assisted suicide law and how Oregon "got it wrong." His second submission discusses what the Holy Ghost does. He did his homework on both of them.

Jeremy, over at Living Among Mysteries discusses his thoughts on conversion stories, that is how someone got from place to another, or in his words "people moving from one tradition to another."

Rev. Klages and his wife Mrs. Klages, each sent submissions. The good Rev.'s submission dealt with something your faithful compiler had never heard of, a contraversy between Arians & Orhtodox Christians (its so much fun to learn new things! Thanks Rev!) Mrs. Klages' submission discusses differences between Protestants, Catholic, and Lutheran Jewlery. Click on "jewlery gallery" link to see some beautifully done necklaces.


Rev. Peterson who writesCyber Stones gives wonderful reasoned defense regarding common cup communion is better than individual cup. (ed note: i was thinking about this post this morning as I knelt down at the communion rail and reached for an individual thimble wine shooter...)

Rev. McCain, aka Cyberbretheren sent this post about "supposed" Lutheran and Eastern Orthodox "agreement" on salavation.

John from Confessing Evangelical sent this post. He describes it thusly:

Reports that George W Bush claimed to have been told by God to invade Iraq, while probably "hogwash", prompt a post discussing what charismatic Christians usually mean when they say that God "told them" to do something, how God does in fact speak to us, and what he says when he does. You can tell God wants you to read this post by the deep sense of peace you just feel in your heart right now.

Andrew from God is the Pilot submission asks if God has changed? An interesting question, one worth pondering.

Earlier in the week, I asked these questions of myself. I looked into a mirror and did some reflection on my faith and Lutheranism.

The entry sent by Just Me the "Life of a Pastor's Wife at Lonsesome Grove" was heartbreaking. What happens when you feel out of sorts and there is nothing to hold on to and things you are comfortable with are suddenly not there...?

Brian Braatz: Nonpareil tackles an important societal question and how it relates to his beliefs.

And finally, Michael who writes Amore et Labor writes about an experience in getting duped. He got taken for $25. I'll let him explain it.

Whew... there it is. This weeks Carnival. This was great fun, work, but fun. If any of these posts have misrepresented by my comments I take full resposibility for them. I ask for forgiveness if I my silliness got in the way, I was having too much fun.

May God bless and keep you all.
Posted by loofrin at Monday, October 10, 2005

Thank you for hosting. Funny how we seem to get four posts up until the last day or two, and then the deluge...

Gread job! Just so you know we added a link to your carnival in the Blog Carnival archive.

Both profs at FW. The greater is the father of the lesser.

Good job with the carnival! Cheers!

FWIW, I don't really appreciate "Rev. Todd". call me Pastor Peperkorn. Call me Todd. With a name like Peperkorn, how can you not want to use it?

Sorry, Rev. Peperkorn, my fault. I fixed it.

Well done! You certainly win an award for the most entertaining introductions. I hope the number of submissions is indicative of the future of this carnival. Thanks also goes to Dan and Elle (or to us many procrastinators) for switching the carnival to every other week. This one's a keeper!

Thanks for bringing attention to Käthe Luther! I'm on a one woman crusade to make her well-known as her husband.

Darn right she was stubborn and pig-headed as her husband! Hence some jabs at her from the recorders and Luther in the Table Talks.

Any woman who rejects who Martin Luther has picked out for her husband and declares "I'll marry Luther or Amsdorf" receives much praise. Plus, in a time when married women couldn't own land, she convinced Luther to buy land in her name, which she would need after his death.

She fed, clothed, bore him children, and basically kept his household afloat. Martin Luther does not live to be 62 without her. Luther declared that he wouldn't give up Käthe for Venice or France. She is an AMAZING woman, who set the standard for the new vocation of pastor's wife.

Some good resources to check out about her is Roland H. Bainton's "Women of the Reformation: Germany and Italy" and Susan Karant-Nunn and Merry E. Wiesner-Hanks' "Luther on Women: A Sourcebook."

I'll leave you with my favorite greeting of Luther's to her. "To my friendly, dear housewife, Katharina, of Luther, von Bora, preacher, brewer, gardener, and whatever else she can be."