A Time for Burning 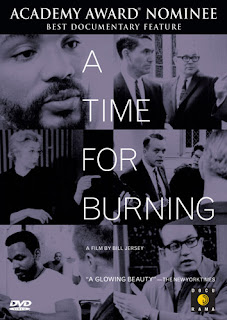 The other night I watched the movie A Time for Burning, it is a documentary about two Lutheran Churches in Omaha, Nebraska. One was a white congregation and the other a black congregation. The movie takes place in the late '60's, I think it was around 1967, or so.

The pastor at the white church decides that he would like to open a dialogue between his church and the other church. Here is the description of the movie from The Internet Movie Database:

I know that for most of my life I had never seen a "black-Lutheran." The first time I had met an black Lutheran was when I attended the Denver Youth Gathering. I ended up rooming with three black kids from Chicago, I think, because my group had an odd number of guys. I didn't mind. They were nice guys, for the life of me I can't remeber their names, though.

I wasn't sure how I would feel about this movie. Its a free flowing movie. There is no narrator so it takes a little while to figure out who the major players are. Thre are three: Rev. Bill Youngdahl, Ray Cristen, and Ernie Chambers.

Ernie Chambers is a black man, who eventually becomes a very powerful senator in the Nebraska Senate. Ray Cristen is the head of the "social ministries" at Augusta Lutheran church. Cristen is an interesting guy. At first he is against the idea completely, but he eventually comes the value of the whole "excercise." Sadly, and this is a spoiler, I apologize, Rev. Youngdahl is removed from his ministry by his congregation of the episode. It is said he isn't a good "fit" for the congregation.

This movie is mainly video of meetings and chats between these three men.

A Time for Burning is about an hour long, I'd say its worth an hour of your day or evening. I'd give it an A-.