yesterday i had an experience that i'll probably never forget.  i'm not quite sure how to describe the general feeling around indianapolis since the Colts won the Superbowl this past sunday.  i would characterize it as "pride," but not in the bad way.  indianapolis just feel good.  there is still a sea of blue every where you go.  the number 18, peyton manning's number, is probably the most prevalent, no, it is the most prevalent.  any where you go you see 18 all over the place.  you see a few others, too (88-- harrison, 44-- clark, 23-- freeney, 4-- vinateri, etc etc).  i wear number 29 joseph addai, rookie running back.

i work next to dick's sporting goods store.  yesterday, about every two hours or so, a fedex truck would roll up to dicks and deliver more superbowl merchandise.  this town has gone superbowl mad.  i myself have bought two shirts.

now, to last night.  there was a parade yesterday for the colts.  it was through downtown and was to end at the rca dome.  i hemmed and hawed all day trying to decide if i wanted to go.  i finally decided i would.  i was scheduled until 230 yesterday afternoon.  so, i left work and drove downtown, parked my car in the iupui parking lot and decided i'd just follow the crowd.  i had a general idea that i'd go to the dome and watch the parade from there.  i got to the dome and noticed that it was open and that many people were going in.  so, like a good lemming, i followed suit.  i'm glad i did.  the tempeture here in indy has been hovering in the low teens and just above zero. it has been quite cold.  the parade was delayed because of various delays in the flights and also the players changed into warmer clothing.  the parad was supposed to start about 430 or so, but didn't get going until much later.  i was in the dome by 300 found a good seat and sat.  i'd never been in the dome before.  it is rather little, hence why the city is building a new stadium, but the sightlines seem to be pretty good.  i sat behind the endzone and faced the stage were the team was going to gather for the "rallly."  i sat and sat.  as did thousands of others.  by the time the team got there almost 45,000 fans were in that dome waiting to welcome the team home and explode in cheers.  they did both. 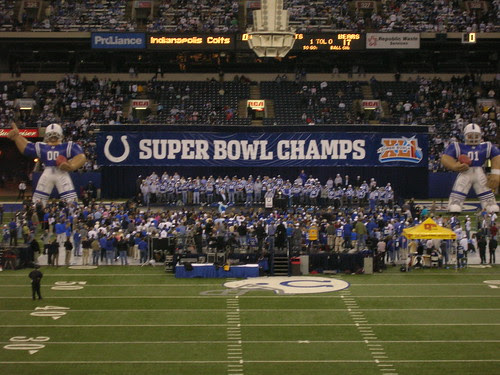 this is a picture of the team on the stage.  coach dungy is addressing the crowd and to the right of him is the Lombardi Trophy, its hard to see, but if you look closely you'll see a little shiny thing.  that's the trophy.  you may be able to clik on the pic and see it better.

this picture is the view to my right in the stadium, keep in mind that by the time the team got there the top section was completely full, too. 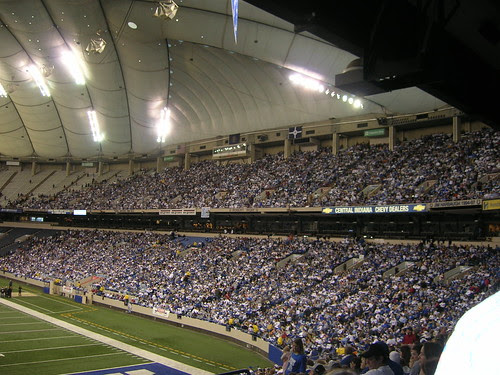 this is the left side of the stadium. 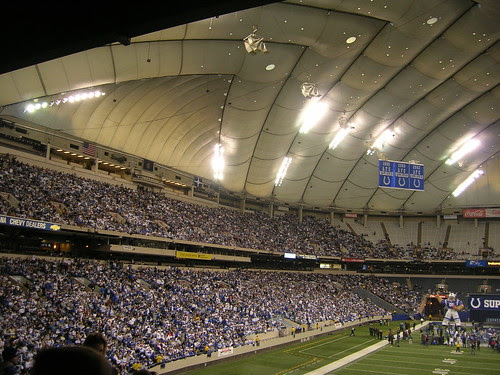 the sound that 45,000 people make in an enclosed place is amazing.  my ears were ringing by the time i left.  it was crazy.  the place fairly shook.  the crowd just exploded when the team rolled in.  a chorus of "DUN-GEE, DUN-GEE, DUN-GEE..." rang out when coach dungy got to the podium.  the roar of "MVP, MVP, MVP..." filled the stadium when petyon manning got to the mic.  the crowd even gave marvin harrison love when he tried to shy away from the mic (he is notoriously shy about talking in public), but he did get up say a few, and i mean a few, words.  i couldn't hear what he said though because it was just too damn loud.

it was just an amazing experience.  the last pic is of all the fans coming out of the stadium. 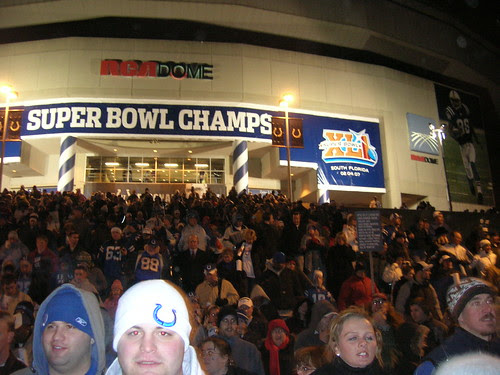 I have a coworker who called me when she was deciding whether she would go or not. My comment to her was that she would never regret not going, but would if she didn't. Now I'm really ticked I didn't follow my own advice. Dangit!! The pics are great.

yeah, it was a good time. i'd never been in the in Dome before.

That was the reason why I went. I decided that it might never happen again and I was just curious what was going to go down. It was a hell of a good time.