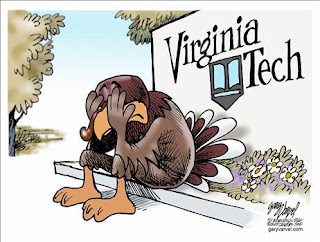 I'm not sure what to think about the events at
Virginia Tech yesterday. What can I say that hasn't already been said? I can just watch the tv and listen to the continuing coverage that goes on and on and says the same thing over and over.

I just can't wrap my brain around the whole thing, that's for sure. Particularly the gap of two hours betwen the first shootings and bloodbath that occured in the engineering building. Those two hours are going to be key. What did the shooter do during that time. Where did he go? How did he get away and how was he so easily missed? Granted, there was a certain amount of chaos in the campus. That's a big campus: 2,600 acres, 26,000 students, over a 100 buildings. I'd say its pretty close to impossible to "lockdown" a campus that size that quickly.

They keep saying that "an email was sent" at such and such a time. That's all well and good, but in order to get said email you have to be at a computer. On a Monday morning on a college campus students are on their way to class so they can't get the message. Word of mouth works, but not that well. This is one of those tragedies, and I hate to use that word because it is one of the most overused words in our languae recently, has a certain amount of shock when it happens. Who expects someone to go shoot 30plus people on a college campus? You can't plan for something like that. I'm not absolving the VT administration of some culpability, but at the same time I'd like to think that they did the best they could.

And it is my sincere hope and prayer that the VT community and the town of Blacksburg, VA can stand strong and tall and in solidarity with each other. My prayers and sympathy goes to the family and friends of the victims. Peace be with you.
Posted by loofrin at Tuesday, April 17, 2007