My Life is a Tati Movie 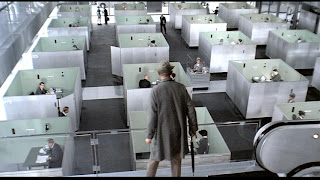 A few weeks ago, on our way home from Western Maryland, my mom and I stopped at the Barnes & Noble in Morgantown, West Virginia (it is one of my favorite BN's ever, I'm not really sure why, but I really do enjoy stopping there). while I was there, I bought the new Criterion release of Jacques Tati's film Trafic. Tati was a French comedic actor and movie directory. His movies include M. Hulot's Holiday, Mon Oncle, and Playtime. Each film in its own way is funny and thought provoking, though, at times, slapsticky, but that is neither here nor there. As a matter of fact, I think it is because each of those films is humorous and slapsticky that they seem to stick in my head, particularly Playtime and now, it appears, Trafic.

Playtime and Trafic are in their own humorous ways "message movies." They both speak to modernity and how it affects (and will affect) humans. It is something to behold these two color movies and realize how stark they really are. Today I realized that my life seems to have taken a bit of a left turn into the land of Tati. I don't mean that in a bad way, though. 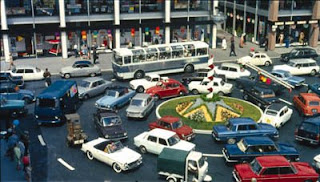 Trafic deals with, you guessed it, traffic in general and automobile traffic in particular. Here is a basic synopsis of Trafic. Since viewing this film I have started looking at my commute to work in a different light. A more humorous light, to be sure, but a different light. It has been funny to be at stop lights and to see people doing exactly what he made light of in his film: singing loudly, picking their nose, primping themselves, etc. Also, the sheer idiocy of sitting in traffic waiting for a light to green so I can go less than a quarter of mile before I stop again (yes, there is a certain amount of Office Space in the whole affair, too).

In the morning, when I'm going to work, it takes me approximately 30 minutes to get there. If I leave at 8 am, I will be there sometime between 830 and 845. However, when I leave to go home, it takes me almost a full hour to go the exact same distance. I left at 5 pm this afternoon, by the time I got the gym which is on the way home it quite nearly 6 pm, maybe a little later. I truly had to chuckle when I was stuck in the middle of an intersection because of a tie up at the next traffic light. I wasn't going any where. And this is Indianapolis for crying outloud!

Today at work I had some training. Part of the training was a tour of the library which consisted of going into offices one usually doesn't get to see. I was traipsed through tech services which is in the bowels of the library, well lit bowels, but the bowels all the same. I was wishing I'd had my camera so I could take pictures, but I didn't and even if I had had my camera I doubt I would of taken any pictures because that might of been rude. 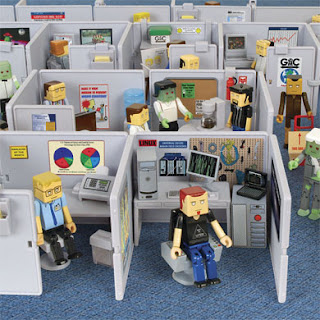 Tech Services, aka cataloging, is in a huge room on the first floor of the library; a massive room that had offices along the walls and cubicles in the middle. Each section of tech services had its own area: Interlibrary Loans, perodicals, digital library, etc. Each section's employees desk were inside their cubicle walls. In fact, one of the employees had a Batman fetish. You should of seen his collection of Batman paraphenalia in his cupicle. I had a sudden urge to move things around and see if he noticed, but I decided against it. This long digression is leading somewhere, I think.

Any way, as we walked through tech services, I kept expecting Tati's alterego Hulot to come bumbling by in his slouched hat and trenchcoat. As we walked through techservices, I felt a bit like a rat in a maze. Or, like Hulot befuddled by modern Paris. It was a weird sensation. And stranger still, I felt an odd pull towards the techservices, like I almost wanted to join them. As a matter of fact, I hope to someday work in techservices for a while, just to try it and see how I'd like it.

Thanks for the recommendation -- just added "Playtime" to my queue.