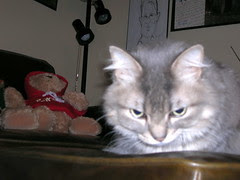 You know, its almost too easy to write about the foibles of one's cat. For some reason, cats just lend themselves to writing. If for no other reason that sheer comedy of their actions and the being. Cats are funny critters.

Most cats like clean. Mine, not so much. He cleans cleans himself incessantly, but he doesn't like it when I change the litter in his boxes... yes, he has two boxes. Long story, but it is an experiment that seems to be working at least some of the time. I clean it regularly, but not the litter. Just what he leaves behind.

My cat, who I call the Barron von Woodster, or Woody, for short, sleeps on his back all the time. His four feet stick straight up in the air his white belly fur is points this way and that. He is a medium haired cat, he looks like he has some persian in his past somewhere. His face is a bit flat, he has very large eyes, as can be seen by his picture above.

He is a funny critter. We know when He's used his box because he when he uses his box he runs like his ass is on fire. He sounds like he has concret boots on his feet. Any one or thing in his way will be run over.
Posted by loofrin at Thursday, October 19, 2006

Maude was thinking "outside of the box" there for awhile, too (hence the antibiotics, actually... doc thought something else may have been going on). Anyway, she's doing better now... but the vet mentioned there's a sort of little made especially for anti-litter box cats. There's something about its chemical make-up that causes cats to want to do their business on it. It's more expensive than the usual stuff, but supposedly works.

Have you tried that?