yesterday was amazing. it was busy and crazy and nuts, but it was really alot of fun and quite cool, too. i got to work an hour early, i didn' t know how the parking lot would be. as i got dressed that morning i was watching the news and i just a long line of people on our sidewalk i figured that the parking lot would be full by the time i got work, i mean its not every day that a former president of these united states comes to my little bookstore, not to mention indiana. by the time i got to work, though, the parking lot was empty. they had given out wrist bands to the first 500 people in line for the bill clinton signing. those that got their wrist bands then left and got some sleep or did some runing around, whatever. (there were some 85 or 100 people outside the night before when we closed... it was like seeing the lines for the star wars movies, or something).

i got to work and manned the cashwrap until 12 when we were shut down so that secret service could do a security sweep. so a couple of co-workers and i went to pizzaria uno's and had some lunch. we came back and things started to happen. people had started to queue up and form the line to get into the store. there was a large area that had been "fenced in" with metal barricades that formed the line, it was the zig-zag pattern you see in amusement parks. we had a large white tent (with a red flag on top, why? i'm not sure) that we kept everyone's personal belongings in paper bags (no keys, wallets, cell phones, cameras or anything-- they all had to be left outside-- we had the bags marked with numbers).

i was outside until about three oclock when i was relieved. i was able to get inside and got involved with basic crowd control. bill clinton arrived a little early (which is unusual for him, he is notoriously late). a loud cheer went up when he came in the store (through the back and through a set of blue curtains that had been set up). he made a quick side trip to the bathroom (seriously) and then came back out (to another round of applause and hoots) and got to signing. he is left handed. he signed his name and shook hands at the same time. his handshake is not very strong. i was expecting a stronger handshake. he signed almost 700 books in a 2 1/2 hour time. i was able to shake his hand (the first time) while i was pushing a large black woman in a wheelchair, she had her book clasped in her hand. she was quite thrilled. she was so excited to speak to mr clinton. i was too, for that matter. when i turned the corner pushing the wheelchair and i saw him for the first time i was in awe. there was bill clinton, former president of the united states in front of me. i got a bit choked up, believe it or not. i didn't vote for the man, twice, but it was still amasiing to see him.

he was wearing a blue shirt, an orange tie (some of my coworkers liked it the tie, others thought it ugly and garish. i thought it looked good on his blue shirt), tan pants, and brown loafers with a buckle on the side. his grey hair was combed back and he looked quite pink. he had a small red pimple or scratch on the end of his bulbous nose. he is not as tall as i thought he was. i was under the impression that he was 6'4" or something like that, but he didn't seem much taller then my six feet. he was quite svelte, too. he's lost a lot of weight since his heart surgery.

after the singing was over he kind of relaxed and just chatted with the store staff. he walked around the store (and we followed like lemmings, or good students) and talked about the books he liked to read (mainly histories and "cheap adventure thrillers"-- his words). he was quite gracious and very funny, he was, dare i say, charismatic. i found myself thinking, "hey i think i'd like to sit and have a beer with him and talk about the world." i had a hard time getting over the fact that the former leader of the free world was standing not five feet from me. i am not easily star struck, but i was in this case.

did i get a book signed? i'm not sure. he signed about 45 extra books for the staff, but there were more staff then there are books. there will be a "raffle" for the books (which we will have to buy). i am hoping i will be able to get one. some of my coworkers don't understand why-- they have a hard time wrapping their brains around my voting record (republican) and my desire for a book by bill clinton. i'm interested in politics and history and i like to have autographed books.

i'm still processing the whole thing. it was overwhelming at times and down right exhausting. i got home and pretty much just crashed. my back hurts today and my arms are a bit numb from carrying barriers and books yesterday. i'll keep you posted on the whole "does the loof-man get a book" thing. 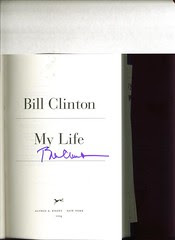 that is kinda cool. hope you win a book, loofie =)

i hope you win a book too

i know how you like history and stuff and autographs

thanks for the hug though :)