On Books and Bookcases 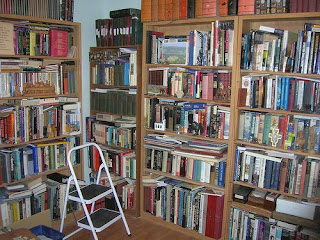 I slept like a rock last night. I don't think I moved an inche. That's a good thing because I moved a mountain of books yesterday, this included a bookcase. I got serious yesterday about my dad's books. I went through everything. I seperated books by topic, sort of. In the process they got mixed up, but that's okay. I seperated theology books (this includes a full box of Luther's Works, not the whole set, but probably about ten or so). There are six boxes of theology books sitting by the window. They may be taking a trip to the Fort sometime this summer. Give em to the cash strapped seminarian, right? Hopefully, it won't make me cash strapped to take them up there... gas at four dollars a gallon?

I have, I don't know, seven boxes of things to go to Half-price books. They won't give me anything for them, but they'll be out of the house. Those boxes contain mainly softcovers and things like that. And then there are four bookcases full of books that hopefully, we'll be able to sell to someone who we contacted. He seems interested in them, hopefully he'll be able to come on Thursday to look at them.

Don't worry, I kept some books. Not many, I have too many of my own, but I did keep a few; mainly, art books, some books about NYC, and a few of his presidential biographies that looked interesting. I keep telling myself that I can't keep everything. I can't, and I really don't want to.

Because of what my father did for a living, minister, he had a lot of books for study, but he also had rather varied interests. He was a history buff and loved to read biographies. He was a New Yorker by birth, a Brooklynite, and when he was a kid he would go to Broadway from time to time to see a play. When he went to seminary in Springfield and then took his first call to South Dakota he couldn't just pop over to Broadway on a whim, so he had broadway come to him. He got involved with a bookclub that would send him a play script a month, hardbound. Really nice, actually. He was a member of this club for over thirty years, so he had a lot of playscripts. He also had playrecords. Full plays recorded. He loved nothing more than going into his office, shutting the door and putting on a playrecord and listening to it.

Its not that much fun. Its a lot of work, but I have found some comfort in the process. There are few books that I kept mainly for sentimental reasons. Those books I know meant alot to him, or there is a story behind them.

The picture at the top of this post is my dad's library. I took it one evening when I was fooling around with my digital camera. I took it a few months before he died. If you look carefull you'll see three fairly large, "blonde" bookcases, and a smaller darker colored one. The three big bookcases are over 40 years old. They were made by a parishoner at my dad's first church in South Dakota. They are about seven feet tall and four feet wide and are strong as ever. Supposedly the original plan was to make them one big unit, but the guy who made them decided it would be easier to three individual instead one big one. This actually turned out to be a good thing. They have been moved around the country six times and have been used as a faux wall at least once between rooms. Those, I'm keeping. 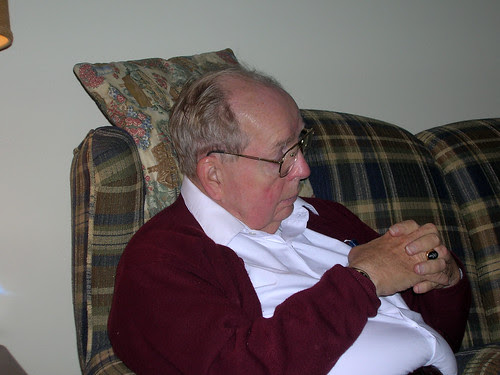 I bet/hope you'll feel relieved once it's all accomplished and the ones you aren't keeping are out of the house.