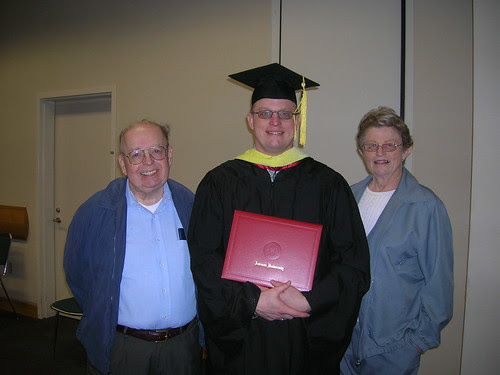 A picture of the family and I after
IUPUI commencement. My dad is on the left, I'm in the center, and my mom is on the right. Those smiles are very real. It felt so good to get that folder, though it is empty at present.

Graduations, commencements, whatever you want to call them are not very different from one another. There is always, though its never really said, a feeling of "good luck and fair thee well, sucka" with graduations and commencements. There are platitudes spoken and well wishes given, but somewhere in the veneer of "alright! you did it" there is a subtle undertow of... I dunno, I can't put my finger on it, but its there. Fear, maybe? On the graduate's part, perhaps.

The commencement that I was a part of was an interesting affair. It was the biggest one I"ve been involve in. I think they said that something like fivethousand sevenhundred diplomas were being awarded this year. I think maybe 2,000 graduates were there, might of been more, it was a sea of people in black robes and multi-colord shashes, hoods, cords, and funny shaped hats. We were in the RCA Dome (where the Indy Colts play). Half of the dome was drape off, that was the "robing area," meaning that's were we put on our funny gowns and colorful hoods and funny flat hats.

I don't know if its like this in other disciplines, but in the SLIS (School of Library Information Science) its tough to make connections with people. I made a few a couple of them are here on myspace: McLarty and Daddypants, but for the most part its kind of being a single manned island. I don't know if its the way the program is set up or the fact that I was only on campus one day a week, but there wasn't much connection with my fellow commencers. Luckily, McLarty was commencing, so I was able to sit next to her and kid around a bit. That made the whole affair a bit more sufferable. It wasn't a bad commencement. It moved along pretty well, commencements/graduations can really drag sometimes. They didn't have a keynote or commencement speaker per se. The presidents of IU and Purdue spoke, but they actually had some good things to say and they said them well.

When SLIS was told to stand to be recognized and get our degreed conferred on us, we let a whoop that just felt good. For me, its been a long, tough two years. I'm still a bit surprised and amazed that I've been able to 1. Keep it together, and 2. Do as well as I have 3. Balance work,school, and life effectively. Actually, it was funny when we stood up a guy about two rows ahead of me (he was from another school, Liberal Arts, I think) turned around, put his finger to his lips and SHHH'd me. Dude, all I have to say is this: I'm a librarian, I'm the only that's allowed to be shooshin, you are the shooshee, I am the shoosher. I should get the Librarian Action figure now with super shooshing action.

I'm not officially done, yet. I have two classes yet to finish. That's six credits. Then the 16-year old dishwasher in my head will maybe, just maybe shut up. Digression: my first job in high school was dishwashing. I worked in a fairly popular restaraunt in a resort area in western Maryland. The first night I came home from work, smelly, greasy and exhausted, I flopped myself down in my parents' bedroom and announced to my mother that I was going to college. The next night I came home, again smelly, greasy, and exhausted and announced that I was going to get a Master's Degree. I'm not sure what happened the next night, but I didn't announce that I was going to go for a PhD. So, I have had this 16 year old in my head prodding me forward. Sadly, though, I don't think he'll be satisfied with one degree... I fear he will be greedy.

All I know is this: this feels good. An accomplishment. I'm not sure what direction I'm going to go in, but it feels good that I have "accomplished" this.

I guess we'll see what happens in the future when that gets here.
Posted by loofrin at Sunday, May 13, 2007

Crazy thing about the future: it has a funny way of being just out of our reach.

Still, congrats on the commencement and best wishes for those couple of classes you'll be completing this summer.

And what's with the shushing?