My friend and recent MLS graduate Erin (who seems to give me writing "prompts" via her posts) wrote a blog post dealing with her job search and some of the frustrations she is encountering.

I've been fighting the same dispirited feelings. I lucked into the position I have now. I got it through a friend, its not a full time position and its barely a "professional position," but it is ina library and I am able to get experience at the university level on a reference desk. I'm lucky I'm in the field of employment I went to school for and trained for. Some of my classmates who graduated with me haven't been so lucky. One of them, last time I'd talked to had just quit his job as a car insurance salesman. That was about a year ago, I haven't seen him since, but that's how it seems to be going. 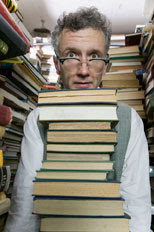 I am rarebird, maybe, in that you'd be hardpressed to find a male who wanted to be a librarian since he was little. Many librarians I know will say the "fell into it by accident" or just kind of meandered into the profession, I on the other hand have wanted to be a librarian since roughly the age of 12. When I got out of college I started working for a bookstore because that was the closest thing I could find to library work. I've stuck with it for almost ten years and balanced that with the librarian gig I have.

This last year has been a bear. Last July my hour at the library I work at were cut drastically. I was lucky to have the bookstore job after all, but I perservered and most of the hours that were cut last year have been returned to me this year, starting this July.

I haven't gotten as much in class Library Instruction as I'd like, but on the flipside, I have gotten a tremendous amount of reference desk experience and can work over a database like no one's business, I actually surprise myself sometimes. I have been able to refine my reference interview techniques and trust on the college level that is important particularly when a student or faculty member has an off the wall topic, there are times that I have to struggle to understand what it is they want, but that is for another post someother time.

In this economic climate it is tough to be a librarian, sadly the first thing cut from budgets are things like libraries (who needs libraries, right?) They still are important, public, school, and university alike. I could go into that, too, but if you've read newspapers, watched the news or even just seen Yahoo news, etc, you'd see that libraries are playing a more important roll than ever before.

I, like Erin have sent sent out application after application, resume after resume and heard nothing from most of the potential employers. That's just rude, first off all and, to my way of thinking very unprofessional. If I'm lucky I'll get an email saying "thanks, but no thanks." I don't like those, either, but at least its contact. I, like Erin, have had my resume looked over, repeatedly. My cover letter reviewed and have been mock interviewed at least once. The process is frustrating and, at times, can be disheartening, but I continue to search and apply and hope for the great break.
Posted by loofrin at Wednesday, June 09, 2010